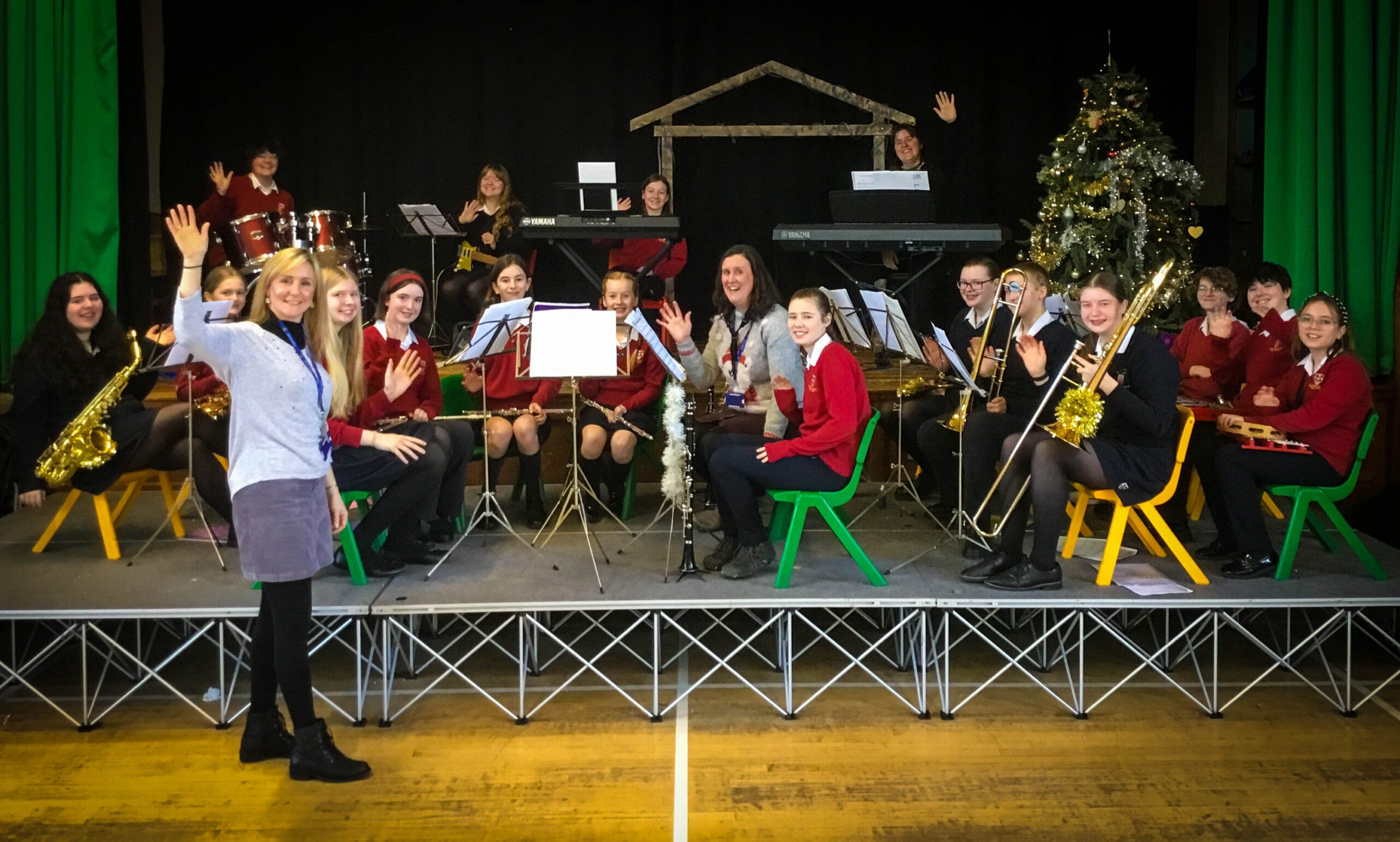 On Wednesday 14th December, the music department went on a mini roadshow to entertain and inspire students at both Penwortham and Cop Lane Primary schools. Students performed as part of the brass and woodwind ensemble and then the orchestra with some students entertaining with solo performances. It was fantastic to see their school halls so full of excitement and enthusiasm. We hope to see some of the students performing here at Penwortham Girls’ with us in the near future! 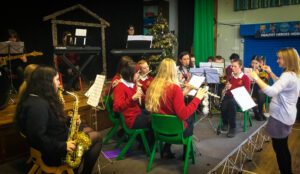 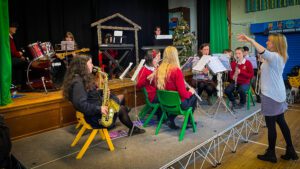 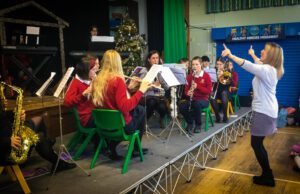 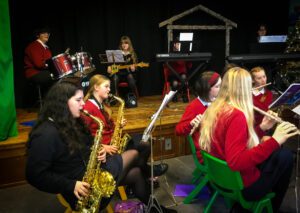 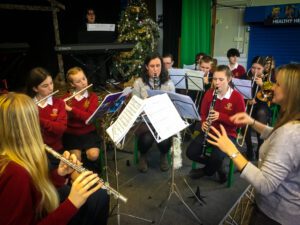 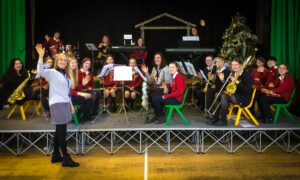 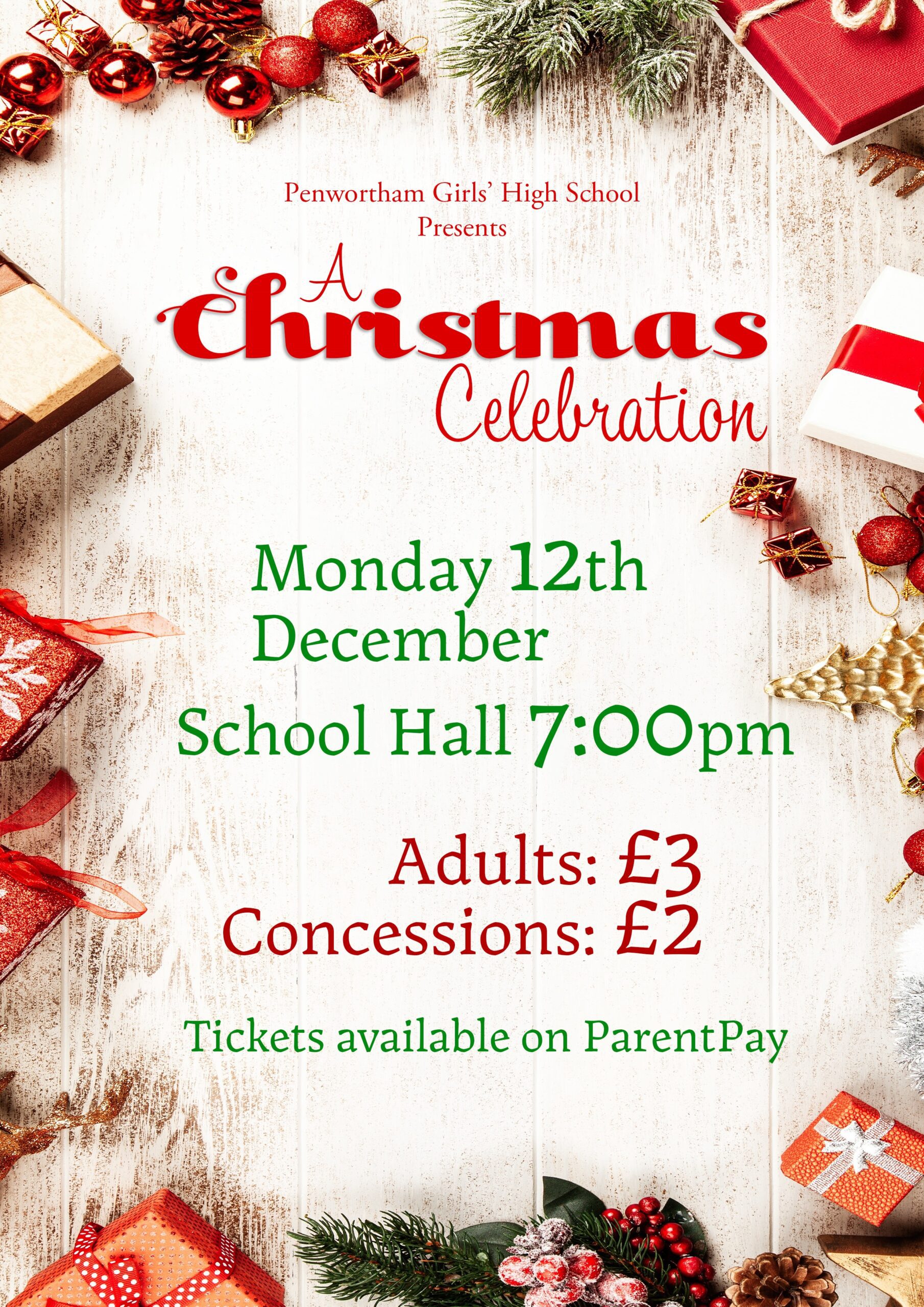 On Monday 12th December, we hosted our annual Christmas Celebration to a sell out audience in the school hall. There were some outstanding performances from the drama group, dancers and musicians alike who truly got us all into the spirit of Christmas.

The drama group retold the classic poem ‘Twas the Night Before Christmas’ which enchanted the audience from beginning to end whilst Y7&8 and Y11 dancers entertained the audience with their Christmas Dance Mash-ups.

There was an eclectic mix of music from the music department this year with the usual superb performances from our regular brass and woodwind ensembles, choirs and orchestra and some fantastic new additions including music from our ukulele group, hand chime ensemble and GCSE Music groups to name a few.

The evening was a tremendous success and enjoyed by all who attended. Huge congratulations to all who took part. Merry Christmas! 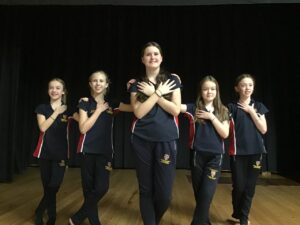 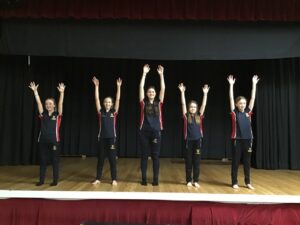 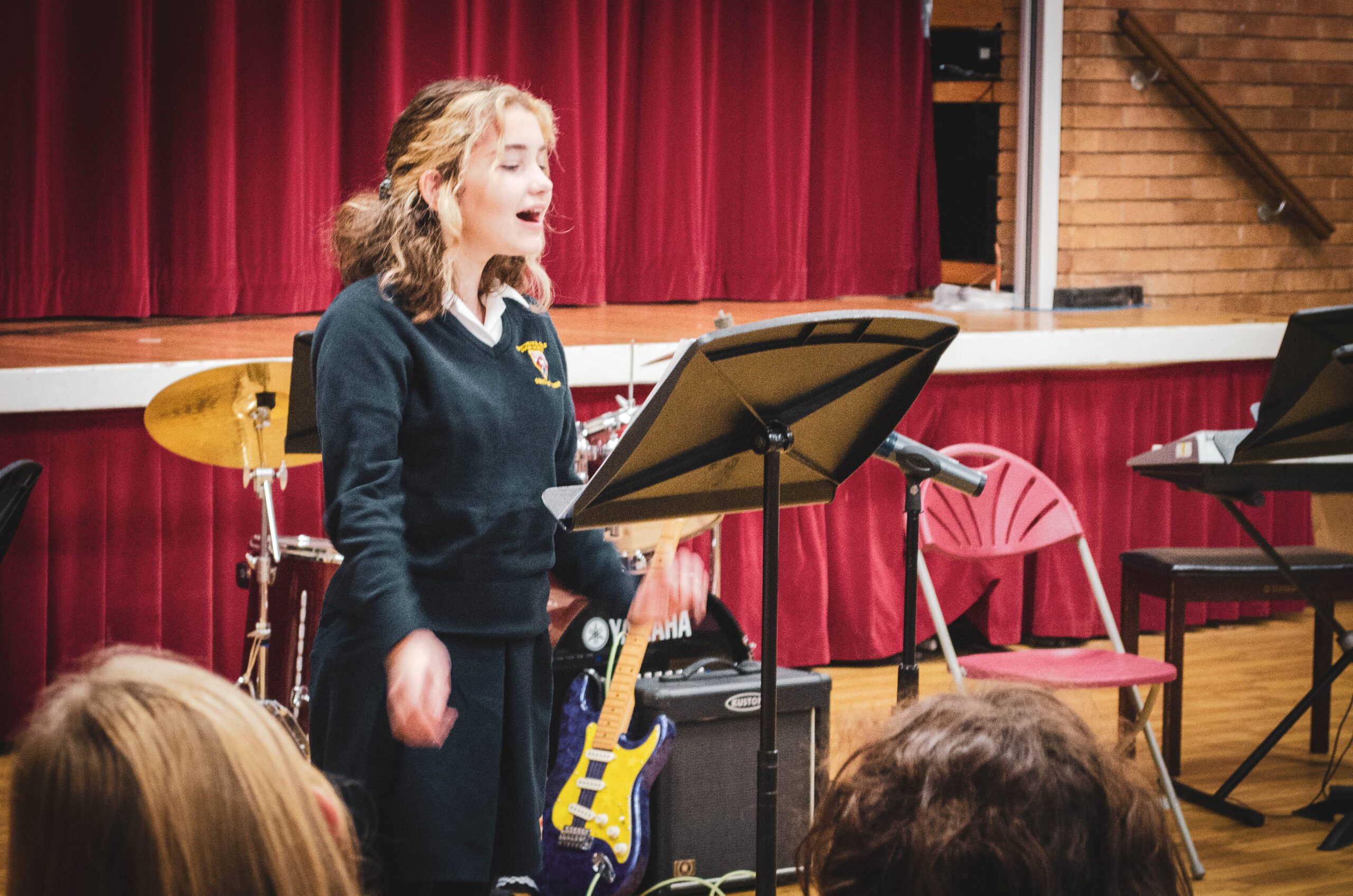 On Monday 18th October, we held our very first ‘Music and Verse’ evening. The purpose of this concert was to provide our GCSE cohorts with the opportunity to perform to an audience in preparation for their future coursework submissions.  It also gave our Year 8 students the opportunity to perform their LAMDA pieces and provided a small number of ensembles the chance to perform to an audience. The evening was a tremendous success with all our students performing superbly. It was also fantastic to hear our Year 8 LAMDA students reciting their verse and prose in preparation for their upcoming assessments.

Each year, the Year 11 cohort choose the charity they would like to support on the evening with all proceeds going to the designated charity. This year was no exception, with students choosing to support The Stroke Association. The Stroke Association are the UK’s largest charity dedicated to helping with the emotional, practical and financial cost of stroke.  They fund research into ongoing rehabilitation that could help stroke survivors live fuller and happier lives. They provide specialist support and campaign to make sure people affected by stroke get the very best care. The evening raised a total of £70.61. A fantastic evening, raising money for a very worthy cause. Well done, everyone! 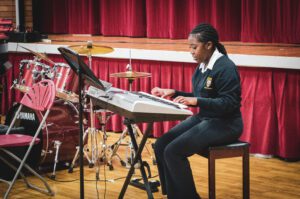 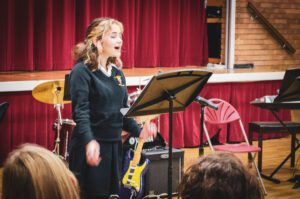 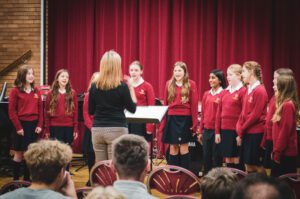 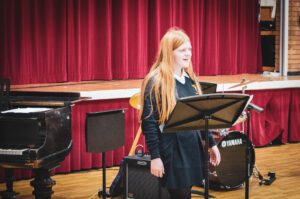 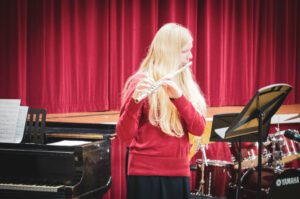 48 students had an absolutely fantastic night at The Lion King in Manchester on Wednesday, 9th November. We had superb seats in the circle and the performance mesmerised both students and staff alike. The musicians were amazing and the acting and dancing were sublime. The costumes and puppetry were so outstanding, you almost forgot the characters were real people!

Here’s what some of our students thought:

“I was completely in awe at such a creative and artistic performance.” Grace T

“I didn’t realise my cousin was in it but he did an amazing job, along with everyone else!”  Brenda C 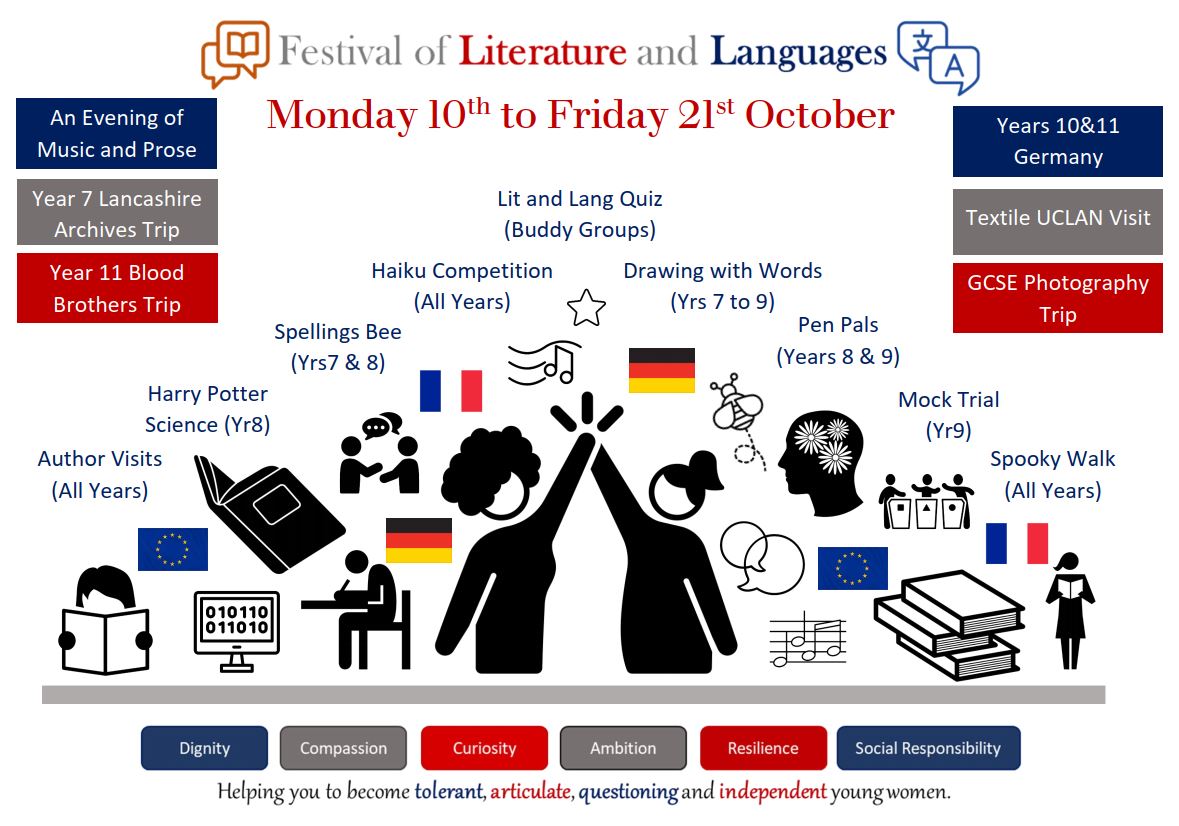 Our Literature and Languages Festival took place from 10th October to the 21st October. A variety of activities, competitions and events took place and it was a huge success. Please click the link below to view the newsletter articles about the festival. 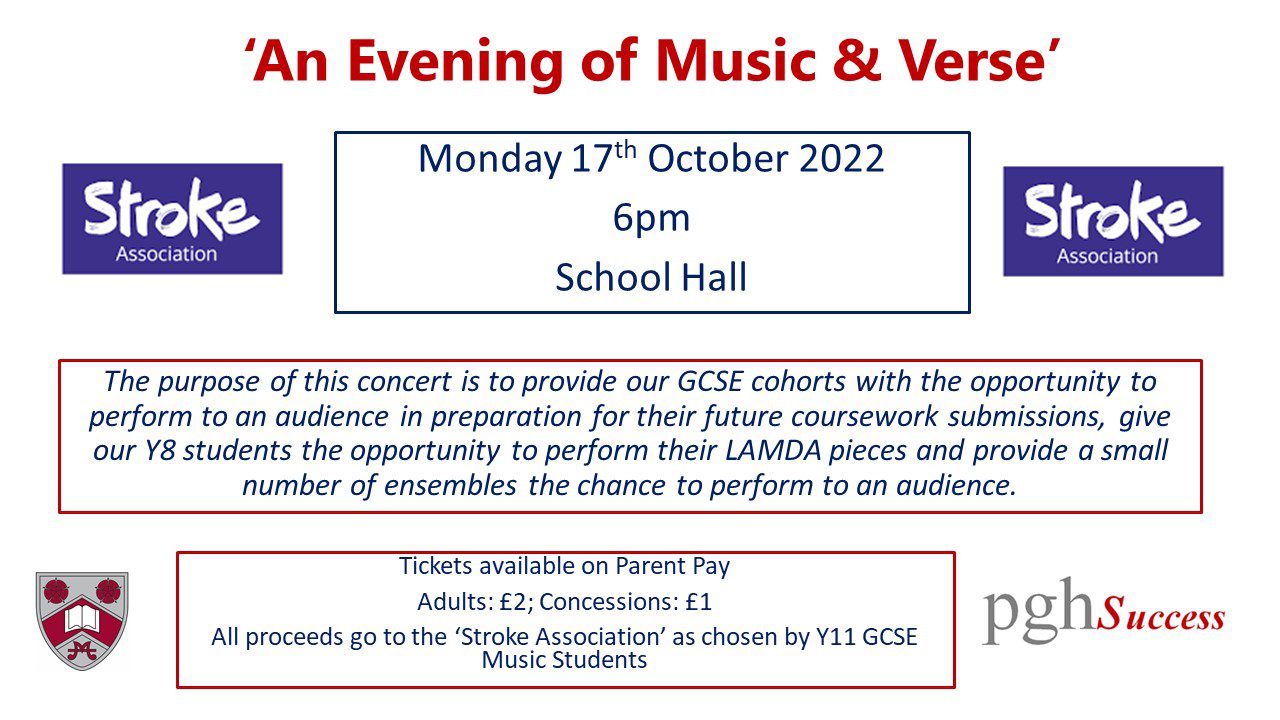 We would like to invite you to our Music and Verse Evening on Monday 17th October from 6pm in the School Hall. All proceeds will go to the Stroke Association as chosen by our Y11 GCSE Music students. Tickets are available on ParentPay and we hope you will be able to join us.

The Music Department are now delivering the Essential Knowledge rotation in Year 7 and 8. We hope the following slides introduce you to the exciting courses now being taught. 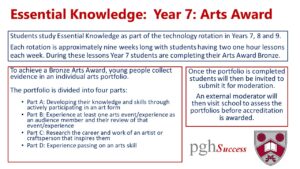 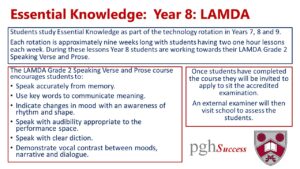 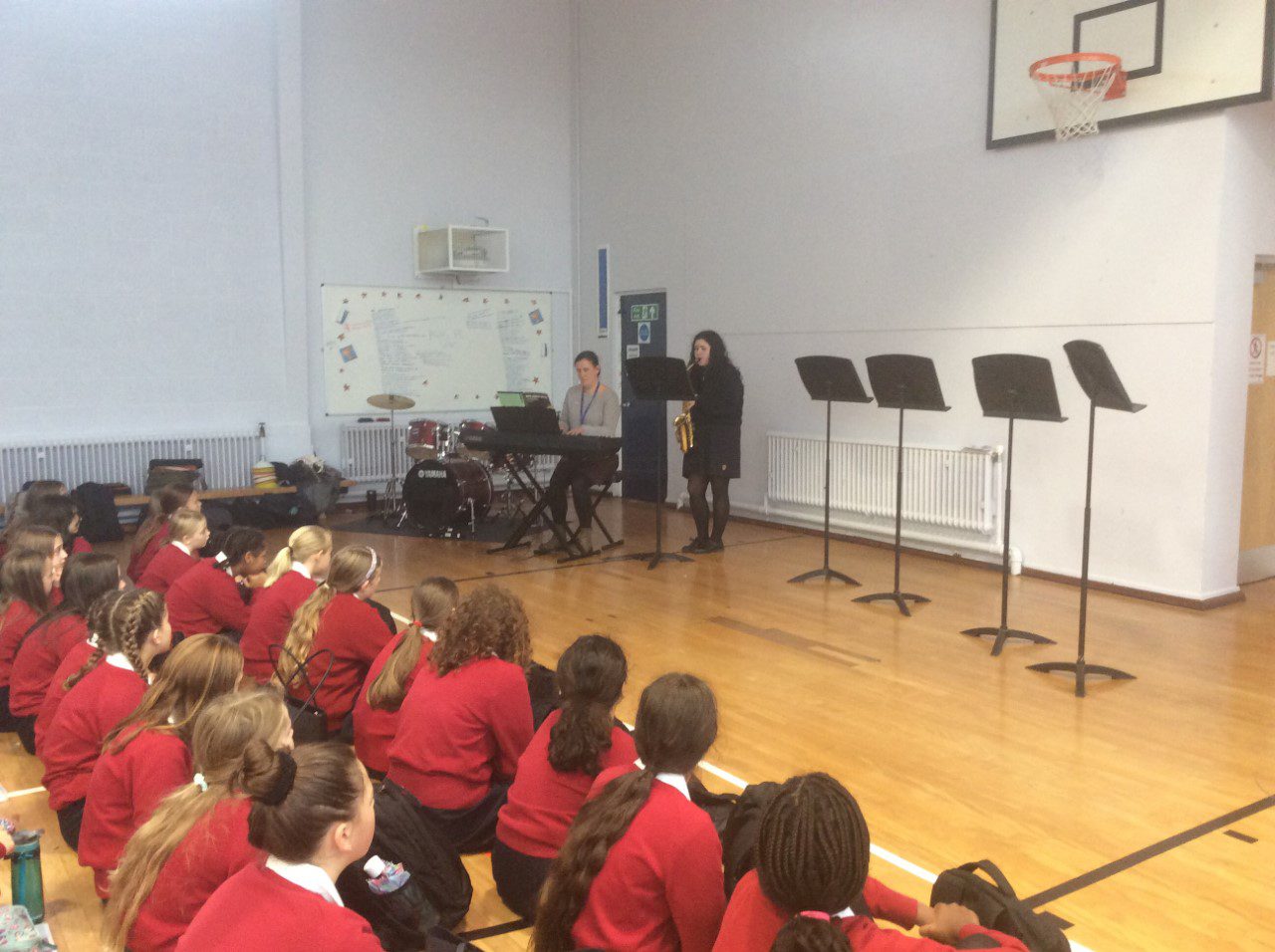 Year 7 have had two fantastic assemblies this half term that introduced them to some of the musical life of the school. On Friday 16th September, Elijah, Isabel, Mr Crane and Mrs Cattanach showcased a number of instruments from the Brass family. Elijah and Isabel both play the trombone and entertained the students with ‘Junk Email Blues’ and ‘You’ve Got a Friend in Me’ to showcase two of the different styles the trombone can play. Mr Crane spoke to all the students about the advantages of learning a musical instrument and the importance it can often play in helping us to relax and meet new friends. On Friday 7th October, Mrs Maddocks and the Woodwind Group took to the stage to perform ‘Eye of the Tiger’ from the film ‘Rocky’. The sounds reverberated round the gym; it was fantastic to hear. Gemma and Bridget also introduced the students to their instruments by playing the flute and saxophone. Bridget played ‘Fly Me to the Moon’ and Gemma played ‘A Whole New World’. Both students played brilliantly.

Following these assemblies, Year 7 students have had the opportunity to try a brass and woodwind instrument and we very much hope that some of these students will take the opportunity to have lessons. If your daughter would like to start tuition in a musical instrument, please complete the form using the following link:  https://www.penworthamgirls.lancs.sch.uk/curriculum-information/music2/music-tuition/ 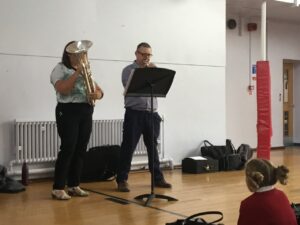 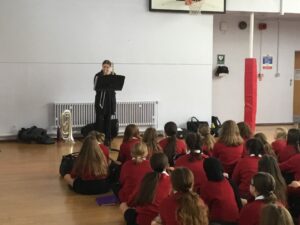 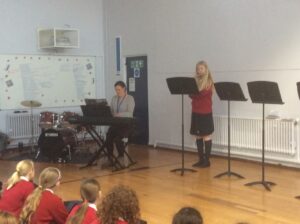 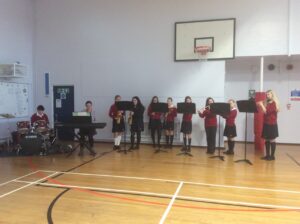 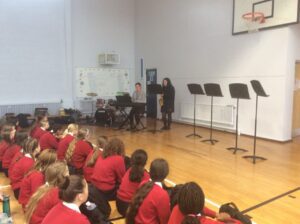 On the 13th and 14th July, Penwortham Girls’ High School performed ‘The Sound of Music’. This was the result of a tremendous effort from students and staff alike. Originally scheduled to be performed in 2020, before lockdown, the recasting and audition process began in February, with rehearsals starting immediately afterwards. The Sound of Music is set in Austria on the eve of the Anschluss in 1938; the musical tells the story of Maria, who takes a job as a governess to a large family while she decides whether or not to become a nun. She falls in love with the children and eventually, their widowed father, Captain von Trapp.

Maria is played by India A, year 9 and Captain von Trapp is played by Sea B, year 9. The children are played by Katie K (Liesl), Mia S (Friedrich), Aoifa C (Louisa), Lily S (Kurt), Olivia H (Brigitta), Libby H (Marta) and Jemima A (Gretl) with the children ranging in ages between Year 7 to Year 10. Mother Abbess was played by Katie T, year 8, who performed the iconic song ‘Climb Every Mountain’ with ease. The show would not be possible without numerous other key characters who were also absolute stars of the show, not forgetting the members of the orchestra who pulled together to create the fantastic musical accompaniment and the dancers who entertained us with their elegance. Overall, the performances were a tremendous success and a credit to the hard work and dedication of everyone involved. We hope that everyone has made some special memories which will be treasured for years to come.

“Lots of talented, young individuals took part, however, it would never have been possible without the planning, dedication and effort of the staff involved. Lots of money has been invested in finding amazing costumes and a whole new set of microphones. Work from the students started in January and they’ve all been working diligently to perfect their roles by giving up their free time. Many months of collaboration between our excellent cast has formed new friendships and bonds which were made evident when the chemistry on stage was obviously displayed. Despite some hard and stressful times, we pulled through together and the outcome was an incredible performance.” Emma B and Katie K (Year 10).

“It has been a joy to take part in ‘The Sound of Music’ after having so long without being able to take part in stage performances. Thank you to everyone in the cast and staff who have helped us to produce this musical.” India A (Maria) 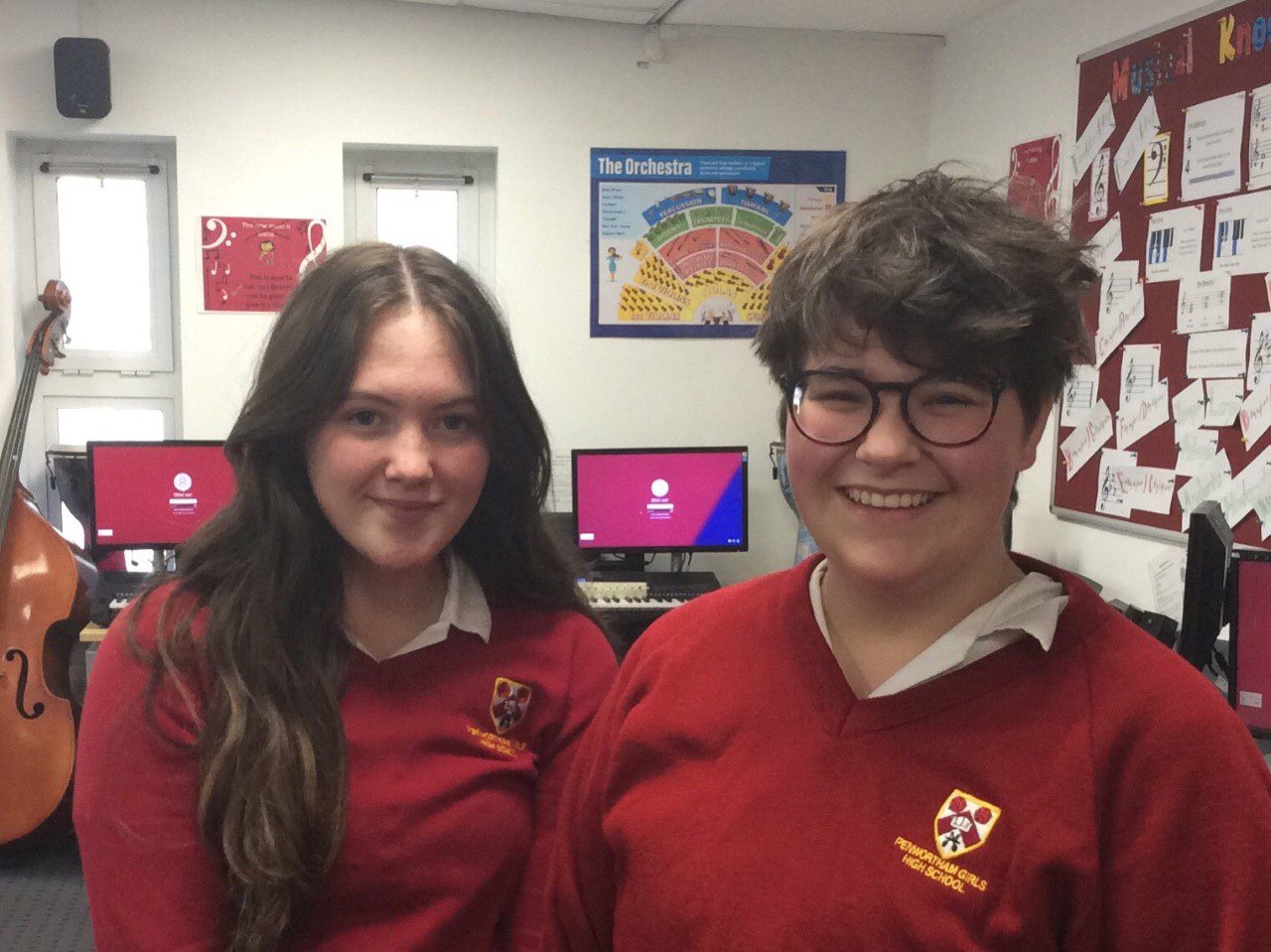 The Friday before half term, we organised a Jubilee Celebration Open Mic and throughout lunchtime, a number of students performed their favourite hits! As these events are becoming increasingly popular, there wasn’t a chance for all the girls to perform so we will look forward to another event soon. It was lovely to see some Y11 students perform their final song and other students perform some of their favourite hits. These ranged from Fleetwood Mac to their own compositions. There was a fantastic atmosphere on the quad with the girls all supporting each other. I was enjoying the event so much that I didn’t have chance to take a photograph this time but here are two students who performed!