Over 120 Year 7 students visited the historic sites of Sawley and Whalley Abbey on Monday 21st and Tuesday 22nd June. As this was the first out of school visit of the school year, there was much excitement and enthusiasm from the students to extend and enrich their classroom learning of Henry VIII’s decision to close the monasteries at two superb local historic sites. Initially, students were given the task of exploring the ruins of Sawley Abbey to discover the purpose of each room. As much of the stone and building materials has disappeared since the dissolution of monasteries, this was a challenging task. The students then took part in a ‘Dissolution’ role play, acted out by enthusiastic volunteers who were provided with a monk’s habit and tonsure to authenticate the look.

After lunch in the beautiful grounds of Whalley Abbey, students conducted a further investigation into the differences between the 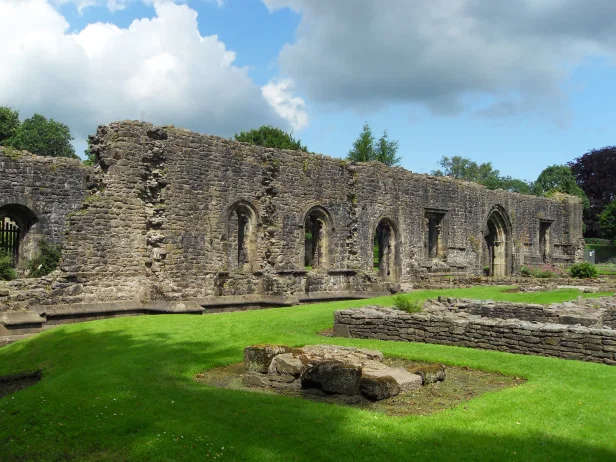 two historic sites. As more remains of the buildings at Whalley Abbey were explored, the students were given a fantastic opportunity to visualise the daily lives of medieval monks and how the dissolution would have affected the local community. Students were also given free time to explore the site and fully appreciate the size of the monastic community established at Whalley. On Tuesday 22nd June, students were also invited by the priest of Whalley Abbey to listen to prayers, held in the ruins of the abbey. The students listened intently throughout and fully appreciated the priest’s explanation of different features of the monastery.

It was fantastic to see so many Year 7 students participate enthusiastically in the visit.  They demonstrated a genuine curiosity for the sites and represented the school superbly, showing respect and courtesy to members of the public when visiting both abbeys.