Last week, students from Penwortham Girls’ High School took part in a number of Remembrance events. The Head Girl and Deputy Head Girl, Carla and Eva, laid wreaths at Penwortham War Memorial on behalf of the school on Armistice Day and on Remembrance Sunday. They also read the names of those soldiers from the local area who lost their lives during the First World War during the Remembrance Sunday service at the war memorial alongside students from Priory Academy and All Hallows Catholic High School. It was fantastic to see so many students from school at the event, whether they were representing other organisations such as the Scouts, or those who had come with their parents. The school charity council members have been raising money for the British Legion by selling poppies in school.  Assemblies this week have focussed on the range of Remembrance activities  that people from this country participate in, and the significance of the tomb of the unknown warrior in Westminster Abbey.

At 11am on Armistice Day a two-minute silence was observed by all in school.  This was followed by a recital of the Reveille by Mrs Little and a superb rendition of Abide with Me by the school brass band.

Caitlin J (Year 9) has been conducting research on the life of one of her great grandfathers, Joseph Anderson Macpheat, who fought during the First World War. Having studied photographs, documents and interviewed her grandfather, this is what she has found out:

PTE 7799 Joseph Anderson Macpheat was only around 18 years old when he joined the army. Before then, he worked on a farm and his employer, the farmer, had to write a reference letter to show how able Joseph is to join the army. This is a photograph of the letter.

On the 14th January 1915, he joined the 10th Battalion (military unit in the army). On the 19th September 1918, a shell exploded and blew a piece of shrapnel into Joseph’s left arm. He was then left wounded on the battlefield from 5:30am on the 19th Sep till 9:00pm the following day (he was left lying there for nearly 40 hours). He was found by Canadians and taken back to his country. He was then officially discharged from the army on the 30th October 1918 (he served in the army for 3 years and 290 days).

He died on the 16th February 1936, leaving his wife (Mary Munro Smith) and his son (Duncan Macpheat). 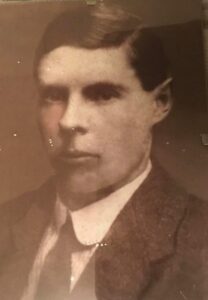 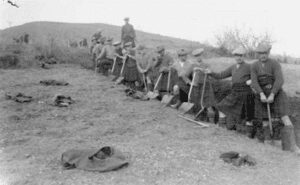 If you would like to know more about how to research records from the First World War or advice on how to research your family tree, please see any member of the History Department.