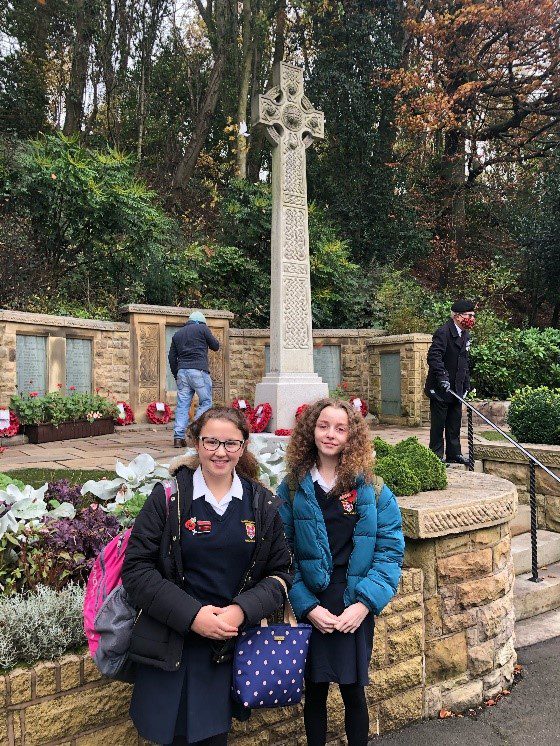 Wednesday 11th November marked the 102nd anniversary of the end of the First World War. Head Girl, Darcy and Deputy Head Girl, Tegan represented the school at Penwortham War Memorial at 11am and took part in the remembrance ceremony. A wreath was laid on behalf of the pupils and staff of the school. The students who remained in school observed a 2 minute silence, which followed a recital of the Last Post by Mrs Little on the trumpet.

This year was particularly poignant because it was the 100th anniversary of the burial of the Unknown Warrior in Westminster Abbey.

On 11 November 1920, the body of one of the tens of thousands of British war dead was carried from Victoria station, where he had arrived from France and taken through the London streets to be “buried among Kings” in the Abbey. It involved teams of soldiers returning to several battlefield sites in northern France and Belgium to exhume a number of bodies. Although the exact number of bodies exhumed is unknown, most historians believe it was either four or six. Those bodies were secretly taken to a chapel at a British base near the French town of Arras, where the Commanding Officer chose which one of them would represent all those who had been recorded as missing in action, presumed dead, without a grave or a proper funeral. He was not told which unit had exhumed which body, nor which battlefield they had died in. No official record of how the Brigadier made his choice was ever released.

Officials at Westminster Abbey had to lift the stone flags to be able to dig the grave and it was the first time soil at the site had been disturbed since the Abbey was built in the 11th Century. When the coffin arrived at the Cenotaph just before 11am, it was met by King George, who placed flowers on it and a personally written note.