In our last week of Term 1, Mrs Gill teamed up with Mrs Scott in Food Technology and they organised a German Christmas baking club after school.  It was incredibly popular but, unfortunately, we only had space for 20 students so we pulled names out of a hat and the lucky 20 girls got the opportunity to bake some delicious German bakes.  Firstly, the students had to read a recipe in German, match up the English and German instructions and then read through them to understand what to do.  Once everyone knew what the process and instructions were, we began the baking. We baked some lovely German gingerbread biscuits and then decorated them.  The students had a fantastic time and the biscuits looked and tasted amazing.  Well done, everyone!  As this club was incredibly oversubscribed, we will be running another MFL baking club to give others a chance to take part so watch out for that!

This term, Year 7 have been working on our new unit of work, which involves learning all about how to give information about animals, pets and family members.  We have been working on learning about whether words are masculine, feminine or neuter and learning the definite and indefinite articles and also the plural forms of the nouns.  To complement our learning, we have all made ‘wanted’ posters for our pets.  Unfortunately, our pets escaped one night and ran around Penwortham so our students have put up ‘wanted’ posters to try to find them again! The students gave a detailed description of their animals and wrote about their personality and special powers that they possess in German, even offering a ‘Belohnung’ (a reward) in a bid to get them back!  They also enjoyed practising ‘superpowers’ in groups, explaining what their animals can do.  Looks like ”Niamh kann fliegen!” (Niamh can fly!) 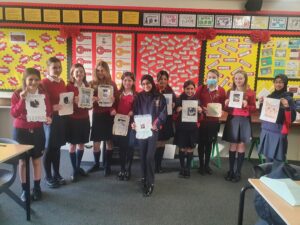 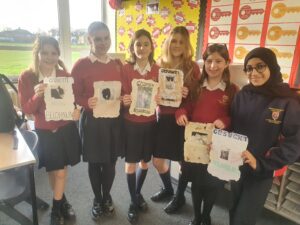 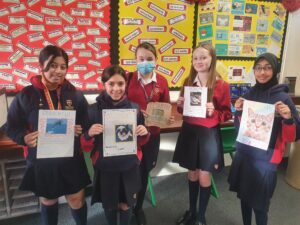 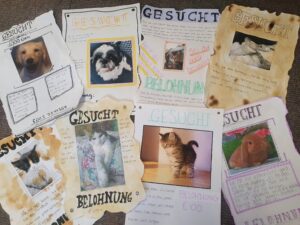 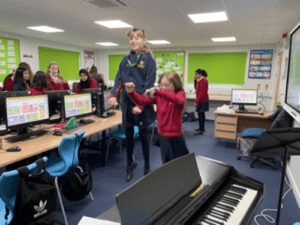 The German Spelling Bee is a national competition that brings together Year 7 students across the country to compete in their German spellings.  Students must try to spell as many words in German in one minute and move through the different rounds.  Congratulations to our Stage One German Spelling Bee winners! These girls have worked tirelessly to learn all 50 words for Stage One and performed incredibly in their individual Stage One final. Each girl had to reply with the German translation of the English word given and then spell it out using their German alphabet. They each did as many as they could within one minute – I think you can agree that’s very impressive!

These girls now move on to Stage Two where they will learn an additional 100 words for the school’s final, where the winners will be moving on to the regional final in Manchester. We cannot wait to head to this competition and show everyone how well we are doing!

Year 8 and Year 9 French were very pleased to receive replies from our French penpals. We got some lovely Christmas cards and letters which arrived throughout December and January. As always, we are so impressed with their English and love receiving real letters. We are already busy writing back to them.

This term, Year 9 have practised asking for food in a café and used the future tense to plan for a special weekend in Paris. Madame Raine was impressed with how well they did in their Speaking assessment. Bravo!

Year 8 are learning how to talk about their typical school day, uniform and are discovering what differences and similarities there are between French and English schools.

Students have enjoyed practising vocabulary using Blooket for homework and we have had the opportunity to use iPads in lessons too. Some students are incredibly competitive! 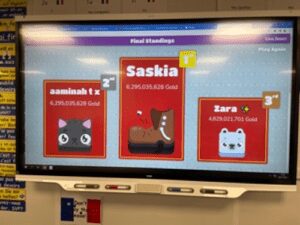 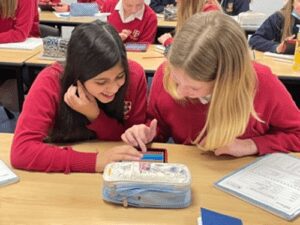 Year 11 took on the challenge this half term of our French and German speaking mocks.  We are super proud of them all as it was their first experience of a formal speaking exam.  All of our students gave their best, tackled the role play, photo card and conversation with confidence and all had lovely pronunciation and intonation throughout.  Well done to everyone, the MFL team are proud of you!