Durga Puja is the Hindu celebration of the victory of goddess Durja over the demon king, Mahishasura. It is seen by some to be the most important festival in many regions of India such as Nepal, Bangladesh, West Bengal and other north eastern  areas. It is also known as Sarbajanin, meaning that it is inclusive of all communities and everyone is welcome to celebrate the festival. It lasts 10 days in the month of Ashvini in the Hindu calendar (September-October). Celebration and worship begin on the 6th day and then the goddess is worshiped in her various forms. It also honours the divine feminine (shakti) and other major deities (four in total).

There are many offers given to the goddess, including food, water or cloth. According to tradition, the idols or Pratima of Durga is made of clay. The artist who makes the idol should collect the soil from the forbidden area or the Nishidho Polli because the soil is considered pure. Additionally, the eyes of the goddess are supposed to be the last thing painted and the third eye should be painted in the darkness . This is the most important ritual for the sculptors and they can take months creating the pratimas. It marks the beginning of the divine mothers journey in the mortal world. The idols are traditionally placed under bamboo and wood.

The first celebration of this festival was said to have occurred in the late 1500s, originating in India and is still seen as an occasion of reunion and rejuvenation. It is believed that Goddess Durga brings happiness, peace and prosperity, although this annual celebration is sometimes not seen as the real Durga Puja but is the more popular one. Others celebrate this in March and it is also known as Chaitra Basanti Puja. 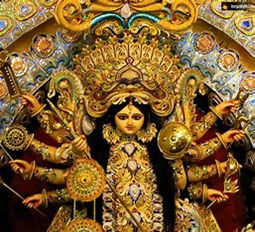 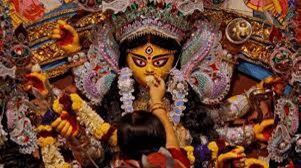 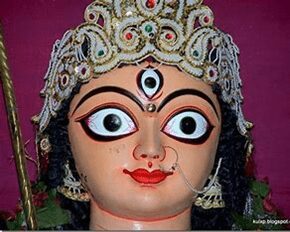