Discovery of the structure of DNA

Year 8 students have been studying the unit, ‘Genes 2’. As part of this unit, they have learned about the function and structure of DNA and the events leading up to the discovery of the structure of the DNA molecule in 1953. James Watson, Francis Crick and Maurice Wilkins were awarded a Nobel prize for their part in the remarkable discovery in 1962, however at the time, the contribution from Rosalind Franklin was barely acknowledged. The students have been researching the crucial role that Franklin played in the discovery and have produced newspaper articles highlighting her achievements and the discrimination that she suffered. 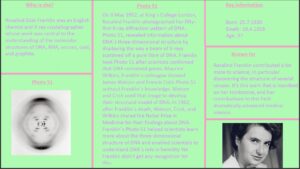 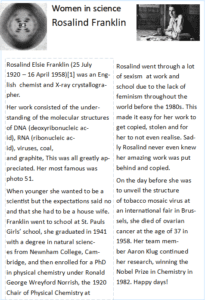