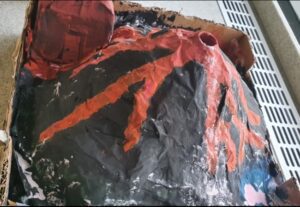 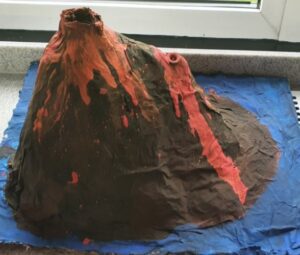 The Cumbre Vieja volcano on the Spanish island of La Palma has occasionally twitched and rumbled, but no lava has emerged since 1971. That changed at 3:12p.m. local time on September 19th, rising magma tore open several fissures on its west side and an extravagant eruption began.

As part of the Language and Literature festival, Year 9 have been looking at the ongoing eruption in La Palma. They were tasked with reading an article on the volcano and, using some reading strategies, had to make sense of the report and condense it down into more manageable chunks. Using their condensed articles, they had to create their own news report. The reports were extremely well written and had some great emotional hooks to make the reader feel empathy. Some students were even lucky enough to be recorded reading their reports with the BBC Intro! We have some budding news anchors in the future!

To incorporate no pens day, we also made models and collages of different volcanoes. They all look amazing! As it is Science, we have also included some chemicals to allow them to erupt! Some students have chosen Coke and Mentos, whilst others have opted for the elephant’s toothpaste reaction! We allowed them to ‘erupt’ on the school field. Some went off with a bang, erupting metres into the air! The Coke and Mentos weren’t as spectacular as first hypothesized. Great work, Year 9!